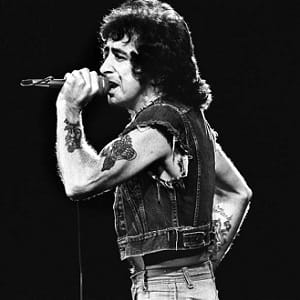 Death can’t contain Bon Scott’s incredible popularity! He will forever be alive in the hearts of passionate musical Australians everywhere, and we have the stats to prove just that to any doubters in the audience!

That’s right, Peter Head and Bon Scotts song “Round And Round And Round”, has just hit over 110 thousand views on the Blue Pie Records YouTube channel, and it’s still growing!

Bon Scott achieved so much in such a short space of time and he would ultimately go on to be the lead singer fronting AC/DC, the greatest rock and roll band in the world. Peter Head is no stranger to musical success with his band Headband. You can check out all the history here www.headbandmusic.com

This video is not the only thing happening around Peter Head and Bon Scotts pre ACDC music. The Looking For Bon documentary project hopes to go far beyond that!

Click here to learn all about it. This is a film-length documentary about Bon Scott and Peter Heads life before Bon took on the role of fronting. ACDC. More news will follow !

As one of the comments on the YouTube video says quite aptly… “AC/DC would never have been without him, and were never the same.”

Bon Scott and Peter Head are Blue Pie Records artists for selected titles. Peter Head is published by Blue Pie Records (APRA) and Blue Pie Publishing (ASCAP) for the world. You can check out more information and the latest news on the Bon Scott documentary and also check out the HeadBand website. We beleive that HeadBand are one of the greatest prog rock bands to ever come out of Adelaide. You may also want to check out a band that Bon was in called “Fraternity”.

We hope you will enjoy taking a trip down memory lane  by visiting the following websites. Peter and Bon more than took a trip or two back in the day ….wink wink !

Check out Round and Round on Spotify and also the great Fraternity and Headband debut albums below.