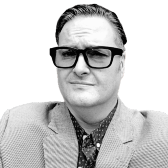 Damien has produced and directed over 65 episodes of music TV shows, and has a passionate history with the realm of music TV in general. Over the past 20 years, he has been a key part of the restoration and curation of several iconic music archives. This process involves restoring masters from tape to digital formats, as well as restoring photo and film archives. Since 2005, he has been involved in the production of over 50 film soundtracks. He and his team at Blue Pie Records and Planet Blue Pictures have raised funding for numerous film projects and TV shows.

Damien founded Blue Pie Records and Planet Blue Pictures to provide the entertainment markets with access to a global network of distribution services, syndication and management agreements. Built over the past 35 years, he brings these agreements to the table, as well as his vast production and directorial skills, to breathe life into this documentary. A veteran in the music, production and directing industries, Damien brings an incredible 35 years of collective wisdom to the creation of the Looking For Bon film and associated projects. As Damien says:

“This is a story that I have always wanted to tell. Growing up in the 70s, our house was a very musical place, and Bon and AC/DC played a huge part in my musical youth. I have been fortunate in my later years to have built great friendships and partnerships in the music and film industry, which have helped enormously with this film’s production process. We have a great team and an amazing story to tell. It is a story that I am sure will resonate with the world, and with all the Bon and AC/DC fans out there.”