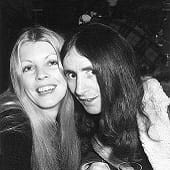 Bon Scott is an undisputed legend of Australian music but that may have never been the case but for a terrible motorbike crash. Irene Thornton, his wife of two years and lifelong friend, has just released a tell-all book on their tumultuous time together, based on 15 never-before published letters by the rocker. On the night of May 3, 1974, he sped off on in a drunken rage and was flung from his motorbike. He very nearly died, and spent almost a month in hospital, but Irene says after the accident ‘his voice didn’t sound the same’.

Click here to read all about the books release: https://www.dailymail.co.uk/news/article-2761862/EXCLUSIVE-Former-wife-AC-DC-man-Bon-Scott-says-drunken-motorbike-crash-changed-voice-superstar.html